In June, The New York Times reported on Robert Julian-Borchak Williams, a Detroit resident wrongfully arrested by Detroit police because of flawed facial recognition technology. Detectives were so confident that the software was correct that they arrested and detained Williams for a crime he did not commit. That’s the tip of the iceberg- local law enforcement agencies across the country wield surveillance technology for policing purposes that are far more sophisticated than body cameras or dashcams. Other tools like cell site simulators, automated license plate readers, and predictive technology are purchased and used largely without any formal discussion in local governments, and indeed little public knowledge or scrutiny.

It’s an issue that goes beyond law enforcement. The last six months have demonstrated how profoundly technology intersects with every aspect of society- from the function of our democracy and the economy to healthcare, education, policing, and social justice. There are complex technical and ethical questions in the implementation of new tech in cities, whether for seemingly benign applications such as COVID-19 tracing apps or for more concerning ones, such as the use of drones to surveil protests. Many cities have hired Chief Technology Officers in recent years but now is the moment to add another set of expertise to city governments. Cities should a hire Technology Ethics Officer (TEO).

A TEO is more than an addition to the bureaucratic machine, it’s a building block

A TEO is a c-suite position that operates within a city’s department of technology that oversees and supports cross-departmental relationships. The TEO and his or her subordinates conduct policy research, technology impact analysis, and other research that allow the TEO to ensure technology is applied ethically in citywide initiatives and policies. As the official tether between the technology ethics team and other city departments such as health, economic development, housing, education, parks and recreation, and public safety, the TEO adapts frameworks to a broad number of city applications.

Broadly, a TEO provides city government with a deep understanding of the nexus of technology and society and uses that knowledge to inform policy. To do this, she or he must have the foresight to determine which technology is appropriate for public use; the ability to evaluate new technology from the perspective of the citizen; and the skills to communicate facts, opinions, and express other concerns to all stakeholders. Because technology is always evolving, the TEO must remain aware of emerging trends and its economic, legal, emotional, safety, and ethical implications. For this reason, the search for a TEO cannot be limited to career technologists or bureaucrats, but should include candidates with backgrounds in academia, economics, law, or sociology.

The death of George Floyd sparked nationwide calls for institutional reform. In Austin, the police shooting of an unarmed man, Michael Ramos, and Black Lives Matter protests pressured city council to approve six policy proposals aimed at dismantling systemic racism, including limiting the police department’s use of facial recognition technology. This may seem like a policy victory, but it should not have taken mass protests in response to the deaths of Floyd and Ramos for public attention and scrutiny to prompt this change. A TEO perhaps would have prevented this from happening in the first place by clearly outlining the considerations of the technology, communicating the consequences with constituents, and ensuring their concerns were included from the beginning.

Also, the policy proposal is limited to facial recognition technology and excludes other technological tools that can contribute to systemic racism. For example, in 2019, Austin’s police department entered a partnership with Amazon that grants it special access to map data and video footage from the company’s popular Ring home-surveillance system. A TEO could have worked to make this partnership more transparent, such as clearly delineating how the police department might use the data in question and what the consequences might be for citizens.

The new focus on ethical technology comes as society’s demand for responsible innovation gains momentum. Technology Ethicist David Ryan Polgar is the Founder & Executive Director of All Tech is Human, a hub for the responsible tech movement. Polgar believes that unintended consequences that arise from technological innovation is a result of giving little consideration to negative social outcomes. Technology impacts the way we live and interact, and the speed at which technology is developed and deployed outpaces the ability of our political systems to consider its impacts at the individual and societal level. The value of a technology ethicist, Polgar says, is “critical thinking, which is necessary to expand the list of questions about the adoption and implementation processes of innovation.”

A TEO is the first step towards ethical technology

Polgar notes that “when more people are included in the process, a more holistic view of technology can be achieved.” The homogeneity that exists within the tech industry is a limitation and a more diverse workforce could have prevented, for example, the problems of racially biased AI and computer vision systems like the one that wrongfully incriminated Mr. Williams. Including non-engineering majors, such as people with humanities backgrounds could also help facilitate these types of conversations.

It would be a misstep if city government used a TEO and technology ethics as a public relations exercise as opposed to a key role that works to improve society. Lastly, technology ethics is not a magic bullet for cities to address systemic inequality. But installing an executive responsible for technology ethics is a step in the right direction towards holding technology companies accountable, supporting better citywide planning, and creating systems in which the impact of technological innovation is thoroughly examined.

Joel M. Carter is the Postgraduate Research Fellow for Protego Press. He is also a Researcher at the Center for Media Engagement at the University of Texas at Austin where he studies geopropaganda and surveillance technology. 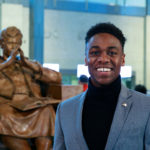