The day after more than 100,000 succumbed to the coronavirus pandemic, President Trump signed an executive order that attacks free speech under the thin guise of protecting speech.

The best part of the Order is that it is, like so much out of this White House, bluster without bite.  But unfortunately, even bluster – when it comes from the President of the United States – matters.

The Order, which has reportedly been in the works for quite some time, responds to what is perceived to be anti-conservative bias on social media platforms.  Twitter’s Tuesday night decision to issue a fact-checking link alongside the President’s blatantly false claim that mail-in balloting would inevitably trigger wide-spread voting fraud appears to have been the tipping point.  The company’s attempt to enforce its civic integrity policy – and protect against the President’s efforts to sow distrust in our democratic systems — provoked the President’s anger (which ironically the President communicated freely on the platform itself) and the Order’s release.

Additional fuel was added to the fire last night when Twitter – quite responsibly – downgraded President Trump tweets that labeled protestors in Minneapolis, responding to  as “THUGS” and suggested they should be shot by the national guard.  In Twitter’s words: “This tweet violated the Twitter Rules about glorifying violence. However, Twitter has determined that it may be in the public’s interest for the Tweet to remain accessible.”  Sharing without comment is disabled, so as to reduce the likely of virality, although sharing with comment is still allowed.

The Executive Order responds to (and anticipates) all this with an attack on Section 230 of the Communications Decency Act—a provision which has been interpreted over time to give platforms wide-ranging immunity for the content that is posted on their sites.  Ironically, however, most commentators deem such protections as essential to preserve First Amendment values and prevent too many take-downs.  If platforms are liable for speech of others, they will act conservatively, taking down more speech than is justified, in order to protect against the risk of liability. Or so the theory goes.

President Trump, however, comes at it from a different angle, suggesting that Section 230 gives the social media too much power to make editorial decisions–and to do so in ways that are biased against conservative voices.  (Never mind that there is little evidence to support his claim.) He, per his executive order, wants to treat those that make editorial decisions he doesn’t like as “publishers,” exposing them to liability for the content that they allow on their cite.  And he essentially sets in motion a process by which the Federal Communications Commission is requested to issue regulations to that effect.

Never mind that treating platforms as publishers may have the opposite effect than what is intended — leading companies to stifle speech more and not less.  Not to mention nothing in the law itself permits the Executive to unilaterally determine the scope of liability faced by the companies.  Nor does it give the Federal Communication Commission the kind of regulatory authority that the Executive Order contemplates, as Ellen Goodman accurately point out in Charlie Savage’s article here.

In fact, what Trump really seems to be doing is to be mixing up the “publisher” and “public square” concepts (and in fact the Executive Order talk about both).  If in fact, as the Executive Order also suggests, that the platforms are public squares, then they are bound by the First Amendment, and have an obligation to allow in a whole bunch of speech that most of terms of service now prohibit.  Even that, however, wouldn’t save his and others’ speech from fact-check labels and warnings.  Platforms might be required to allow racist rants and attacks on our democratic processes, but they also would have free rein to counter hate and lies with alternative speech as well.

Meanwhile, the idea that social media companies could be both “publishers” and “public squares” is a nonsensical one.  What Trump really wants is to have it both ways – picking and choosing the piece from each doctrine that suits his needs, in order to spew hate and anti-democratic rhetoric without challenge.

Twitter should be praised for insisting on the basic premise that even the President has to play by the rules. 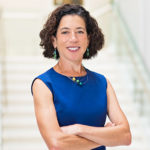 Jennifer Daskal is a Professor and Faculty Director of the Tech, Law, Security Program at American University Washington College of Law, where she teaches and writes in the fields of cyber, national security, criminal and constitutional law. Prior to joining DOJ, Daskal was senior counterterrorism counsel at Human Rights Watch, worked as a staff attorney for the Public Defender Service for the District of Columbia, and clerked for the Honorable Jed S. Rakoff. She also spent two years as a national security law fellow and adjunct professor at Georgetown Law Center. From 2016-2017, she was an Open Society Institute Fellow working on issues related to privacy and law enforcement access to data across borders. She is currently a Scholar-in-Residence at New America.

Daskal’s scholarship has appeared in the Yale Law Journal, University of Pennsylvania Law Review, Vanderbilt Law Review, Stanford Law Review Online, and Harvard Journal of National Security Law, among other places. She published numerous op-eds, including in the New York Times, Washington Post, and The Atlantic and appeared has appeared on BBC, C-Span, MSNBC, and NPR, among other media outlets. She is an Executive Editor of the Just Security blog.