As we all long for freedom from lockdowns and home confinement, people would love to believe ‘there is an app for that’.

Many countries are discussing, planning or even implementing so-called contact tracing apps. There are heated debates about privacy and security issues.

But what’s missing in most debates is how effective the apps actually are — and there could be some rude awakening.

Let’s have a look at what happened in the Netherlands.

The government announced apps would become the core of its new testing policy – it even didn’t exclude mandatory downloading.

Noteworthy: this stands in stark contrast to the ‘smart lockdown’ with strong reliance on personal responsibility that has characterised Dutch policy so far.

However, the Dutch app quest has turned into a soap opera.

Over Easter the government issued an open tender for app developers with only three days to respond.

Of the 750 proposals, 63 were long-listed and seven were finalists who appeared in a hastily-organised and live-streamed “app-athon”.

All seven failed to live up to the privacy and security criteria, that became clear only as more questions were asked.

In parallel to the app-athon, a lively public debate about the idea to ‘hack the virus’ gained steam. Questions from privacy to security, from effectiveness to technology, from behavioural aspects to uptake – it became clear there are alternatives such as targeted testing and regulating specific groups and places that might be more effective.

Besides legitimate concerns about privacy and cyber security, there are all kinds of other questions that need to be answered before we know whether an app, and which app, would have added value.

What problem does an app solve exactly? The devil, as always, is in the details.

For starters, it’s difficult to determine the effect of app use in combination with early and extensive testing, the massive wearing of face masks and strict enforcement at physical distance.

Moreover, most of these other measures have not been taken by the Netherlands.

No tracing without testing

The country currently only tests people who have symptoms and went to see a doctor, patients who are in a hospital and healthcare workers who are at higher risk of infection.

And without offline testing, online contact tracing is not effective.

If an app needs to keep track of whether people are infected and whether others have been around them, the first thing we must know is whether someone is infected. How can we know that? By testing.

There is a one-to-one relationship between testing and what you can track with an app.

Meanwhile, research simulating the effects of different policy measures to curb the coronavirus in the Netherlands found that randomly testing people could in some cases be more effective – and would need less tests than the uptake of a contact-tracing app.

The app would need to be paired with more than 100,000 daily tests in order to have effect, which is much more than the current number.

Without testing, all those who may have been in contact with infected persons would have to go back into self-isolation.

Within one or two weeks, the Netherlands would have one-to-two million people confined to their homes again. The research also showed that far more than 60 percent of the population will need to use the app in order for it to be effective.

Before rolling out any app, countries must do a coordinated assessment of usefulness, effectiveness, technological readiness, cyber security risks and threats to fundamental freedoms and human rights.

Most importantly, the Dutch experience teaches us that such assessments should include non-app alternatives. Only when a comprehensive, complete society assessment is made, can the various pieces of the puzzle to end lockdowns come together.

But governments placing all hope in an app to re-open the economy – and big tech and big data firms keen to sell them this dream – run the risk of creating false security.

After all, if people believe they only need to be mindful when their phone tells them so, they may lose track of distancing, hygiene, masks and other precautions.

Sadly, there is no magic wand to hack the virus.

This article was first published at EUobserver. 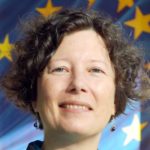 Alice Stollmeyer is the Founder & Executive Director of nonprofit foundation ‘Defend Democracy’. A former digital advocacy strategist, she has lived and worked in Paris, Amsterdam and Brussels, the heart of the European Union.

In 2016 @StollmeyerEU broadened its portfolio: previously focused on energy and climate policies, now its focus is politics, digital developments and European values like democracy, human rights and rule of law.

To achieve its mission, ‘Defend Democracy’ works on communication, cooperation and community. Its successful signature event is currently held in Brussels, Berlin and Washington DC and is expected to be launched in Copenhagen, Aarhus, The Hague, Kyiv, Vilnius, London and Madrid soon: monthly #DemocracyDrinks to grow and support communities of democracy defenders.